About React Native App, Benefits and Common Errors Made by Developers

A feature-rich and functional business app is capable of reaching more than 6 billion mobile device users all over the world. No matter, whether you have a start-up or a large firm, we all need to have an application to engage and convert mobile users. According to statistics, the number of apps downloads has crossed over 200 billion in the year 2019. There is no doubt that the app industry is booming and leveraging great advantages as well.

In the beginning, all mobile apps might look quite similar; some of them even give the best features, information, and user interfaces. Meanwhile, when you start to compare different applications, you’ll observe some apps have restricted speed, functionality, and display quality. 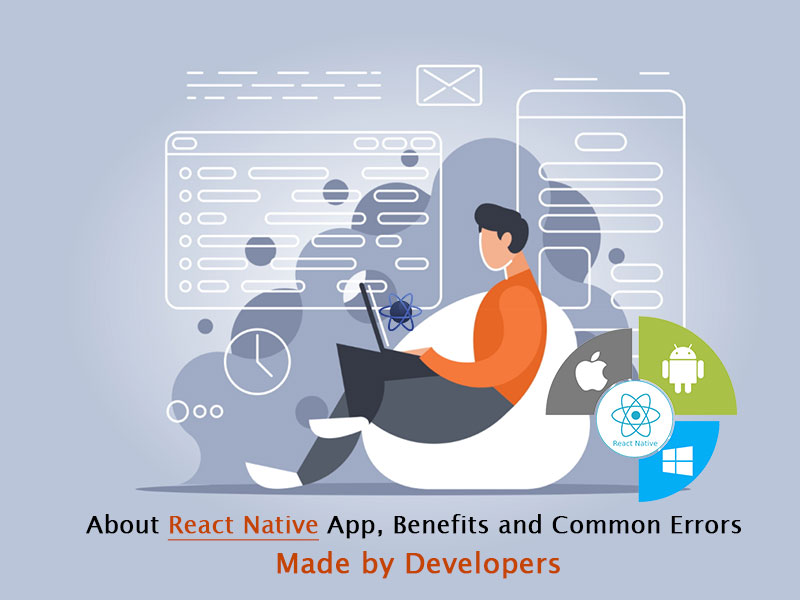 As a professional developer, you should select the right programming tools to make an advanced and error-free app. React Native is one of the best tools that you can consider.

React Native or sometimes known as RN is a JavaScript-based mobile app framework. It helps to build native mobile apps designed for Android and iOS. The framework allows you to make an application for a different platform with the help of a similar codebase.

It was first released by Facebook as an open-source project in 2015. Quickly, it became the best solution to use for mobile development. It is used by top companies like Facebook, Instagram, and Uber among others.

The Advantages of React Native for App Development Solutions

More than 90% of the code is cross-platform, which implies it is friendly for both iOS and Android. Developers just need to create a single app, and in the end, two apps are made. It directly saves time in the app development process and also results in money-saving.

React Native apps work out preciously similar to a native app that was created on the specific Android or iOS platform. They are even quick as the programming language is managed with mobile devices. Despite making use of the central processing unit (CPU), React Native apps take benefit from the graphics processing unit (GPU). It turns it quicker as compared to the cross-platform mixture technologies.

It has a special feature known as “hot reloading” or “live reloading” which allows developers to quickly check the modification that they’ve made to the code in the live preview window right away.

An important point that some programmers forget is that the design of the iOS and Android apps is rather different from each other.

React Native allows you to make use of the different modules for different platforms using a single codebase. However, many things could not be used again and again. Moreover, in the starting programming days, it is simple to undervalue the codes number that you will need to write down.

Redux is considered quite an easy tool that assists in effective application management. It even lets you store information collected by the application properly. However, Redux is widely used in React Native. Proper planning is important to avoid any sort of issues. It can increase the workload. However, it may appropriate for big projects and apps. However, it is not a right choice for the small plans.

The prime reason is that it needs you to write complex and long codes even to make the small changes. Therefore, it is not suitable for a small app. React native app development services should take care of such things.

No doubt, app development is a time-taking and difficult process. We all wish to keep things as simple as possible. The common means that developers achieve is making use of the external modules at the time of the app development procedure.

As the external units are expected to come with documents and previously have formed codes, it boosts the speed of app development.

One common error that normally a developer makes when making use of the external modules is not going through every code that it includes.

There is no need to say that a testing unit is one of the ordinary and easiest errors to make when developing a React Native App. A React Native app requires two different testers to test it on iOS and Android platforms.

The Definitive Guide to Building an App using React Native

Are you looking for expert app developers?