Security Features of Android P and iOS 12 – A Quick Review

In the high-profile data scandal case of Facebook and Cambridge Analytica, data of some 87 million Facebook users have been compromised. These companies were then asked to adjust their security policies. After that a sweeping new data protection and privacy – the General Data Protection Regulation (GDPR) was prepared, which went into effect in late May 2018. 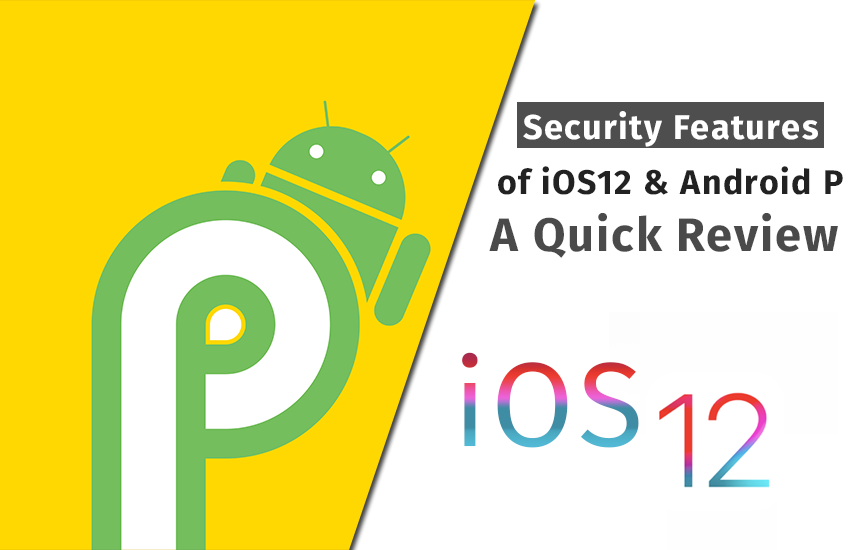 Google and Apple are located miles apart from each other in the heart of Silicon Valley, but they always strive to compete against each other to capture the mobile app market. This time, Google will launch its new phone with Android P, probably in September or October 2018, Apple is expected to launch the next iPhone series plus iOS 12 in September 2018.

But the breaking news of the hour is that both Google and Apple have taken a stringent step regarding the security concerns and app publications. Keep on reading further to have an in-depth detail of the latest security features available in Android P and iOS 12.

As per the new settings build on the “Security Checkup,” users will get personalized recommendations to improve the security of their respective accounts. For instance, users can be asked to remove unverified applications which ask to access their account data.

With the introduction of Android P, an app will not be able to access your camera, microphone and sensors while the app runs in the background. If it will access, then user will be notified that the app is doing so.

The step has been taken to make sure that bad apps are not able to go against the granted permissions. The app will be required to provide valid reasons along with foreground process if it really needs to access one of these elements.

No matter when was the app last updated or what Android version level it is targeting, the change will surely affect all apps in devices with Android P operating system.

You all are aware of the fact that Android saves data from your device and later makes it available when you sign into a new tablet or device. However, with Android P, for data encryption, client side secret features will be used.

This means that the encryption will be protected in accordance to the information derived from your phone’s  PIN, Pattern or Password. This clearly signifies that it will be more than tough for anyone to access the info.

Presently, when you connect your device with any Wi-Fi network, your device’s MAC address is tracked by the network. This means there are possibilities that your location is also getting tracked while you connect to different networks all throughout the day.

With Android P, the system will generate a new and random MAC address every time you will connect to Wi-Fi network. The address will remain the same for one network over time but will get a new one as soon as you connect to the new network.

This will end the problem of permanent and device specific ID, which follows you everywhere and leaves a lasting mark.

In other words, it can be called Digital Rights Management (DRM). With it, Google is trying to improve the security of the Android platform by making it tough for the fraud apps to be installed.

This metadata will be applied by the developers to all apps with the help of latest APK Signature Scheme. This will boost the confidence of Android users that they’re downloading the real apps – which have been given the green signal by Google.

It will be beneficial for Android app development companies too as they will be able to track how and when their apps are being used.

iOS 12 is expected to be launched in autumn of 2018. Apple has already made it clear that the next version of its mobile platform is more safe and secure. One of the exciting news about iOS 12 is that it will be compatible with all iPhone, iPad, and iPod touch devices that support iOS 11—including iPhone 5S and the original iPad Air.

Along with password suggestion capabilities and password management, Apple has also improved the way two-factor authentication is handled. The step has been taken to make security practice less troublesome and iPhone app development companies have been urged to implement this feature.

With iOS 12, the system will automatically copy the code that has been sent on your device so you can easily paste it on the apps log in page.

In short, when the app will send a unique code via SMS to the device you’re using, you need not open that message. Instead, the operating software will itself copy paste it in the gap provided.

In reaction to Facebook’s Cambridge Analytica scandal, Apple has taken a step forward to minimize the amount of data the developers can collect about a user’s friend.

Till date, the developers were able to access the user’s contacts, name, phone numbers, addresses, and later used it for marketing or selling it to the third parties.

Apple has a put a ban on this practice. The developers will no more be able to create a database of user’s contacts. Apple has also explicitly forbid the developers from selling that information to third parties.

However, with your permission, Apple can still use that information to identify if you’ve any existing friends on the app or allow you to send an invite to the app.

We all are aware of the history of Apple with law enforcement. As per the new unlocking provision in iOS 12, the OS will cut off data transfers through a USB port if the phone hasn’t been unlocked in past one hour.

This mode was tried and tested in the previous versions, however, the time limit was one week. In simple terms, it means, that if the law enforcement bodies fail to unlock the phone within an hour of crime, they can face trouble getting into it.

Last year, Apple gave its users the ability to disable the Touch ID option so as to prevent law officers from forcing a user to unlock his or her phone.

Apple hosted its annual Worldwide Developers Conference (WWDC) keynote on Monday, June 4, 2018, during which they made it very clear that new tools are being introduced to help prevent sites to track users web browsing history or pattern.

There are a number of websites and ad platforms that use cookies to keep track of your activities across the web and later use that information to build a profile of your identity and serve you with the most relevant ads. But with iOS 12, Safari browser will prevent those tools from extracting your data until and unless you permit.

In the near future, both Android and iOS 12 are coming with astonishing security features, which will enable users to lead a secured and safe life when it comes to smartphones. The need of the hour is that the mobile app design and development services providers should start implementing these security features in their developed apps so as to avoid any security issues in the future.