September remains the month of new Apple hardware events. The company on  September 15 came up with an announcement of a range of new products and services in its ‘Time Flies’ event. During the virtual event, CEO Tim Cook came up with its exclusive offerings for Apple family users. The event was focused on the 8th generation iPad, Apple Watch Series 6, iPad Air, and Apple Watch SE. The company also introduced all-new services – Fitness+ and Apple One bundled service package. Read on for a full recap of everything that the company announced during its September 15 event. 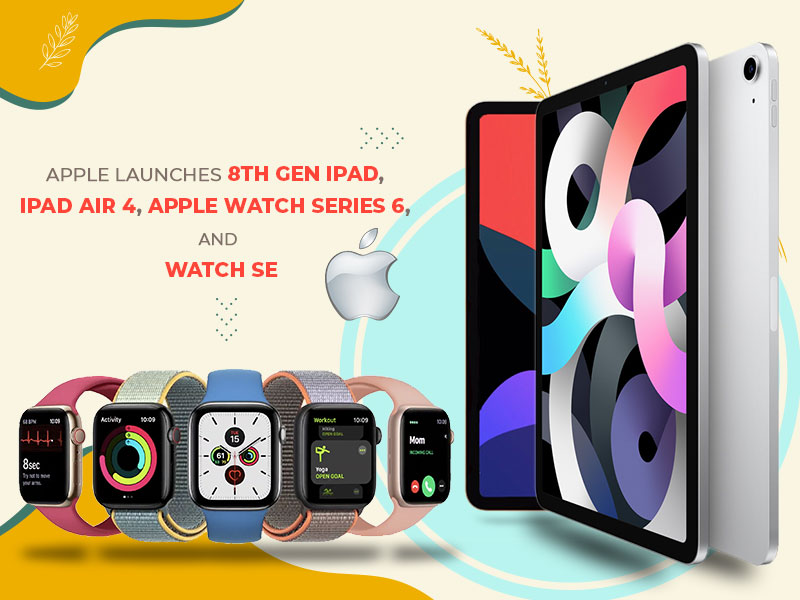 The latest Apple Watch Series 6 retains the same predecessor and aesthetic, it adds a number of color options, functionalities, faces, and other exclusive features including a blood oxygen sensor as well. The oxygen sensor will help in measuring a person’s breathing as well as overall heart health.

The watch has a screen that gets brighter when viewed in the sunlight. It has an always-on altimeter that gives real-time updates for elevation. The price of Apple Watch Series 6 will start at $399. The company also made an announcement on its partnership with Singapore for health initiatives with the Apple Watch being a core element.

It is quite similar to the iPhone SE which was introduced a few years back. This time, the company is debuting a lower-end smartwatch series that has been named as Apple Watch SE. You will be able to find many similarities in Apple Watch SE and Series 6. Not just the overall look, gyroscope, altimeter, accelerometer, and many other features are unchanged.

The watch has an S5 chip and is touted to be twice as fast as the series 3. It has a Family Setup feature which allows the watch to be set up through the iPhone of parents. It will allow kids to connect with their family and friends through calls and messages. Starting from $279, SE will be available in the US and many regions from September 18. Apple Watch SE will come with WatchOS7.

With this product, Apple is following an aim to refresh the iPad Air’s design and bring it closer to that of the iPad Pro’s. The device will flaunt an edge-to-edge display with the thinner bezels. The iPad has an A14 chip which makes the device the first Apple product to get the new mobile chip. The chip works on Touch ID and is built into the power button.

The iPad is designed with a 7MP front-facing camera with a smart High Dynamic Range, a 12MP rear camera, USB-C connectivity, stereo speakers, and much more. Starting from $599, the iPad will be available from October in the US and other regions. In terms of performance, the Bionic processor will grab huge attention to the new Apple Product.

The 8th generation iPad is an amazing product that houses an A12 chip that commends a 40% boost in CPU performance. It has two times greater graphical power of the previous generation. Some other exclusive features of the iPad include a 10.2-inch retina display, Apple Pencil, Smart Keyboard, 8MP camera, and more.

The product is an upgrade from the previous generation’s A10 processor. With all the exclusivity, the 8th generation iPad will start from $329. The iPad will offer more than twice the performance of the top-selling windows laptop, 6x faster than a top-selling Android tablet, and 6x faster than the best-selling Chromebook.

It is a bundle package announced by the company for all the Apple services like Apple TV+, Apple Music, Apple Arcade, iCloud, etc. available for users. It is known as the umbrella subscription. It has made all of them more affordable than purchasing a la carte or signing up for individual service separately.

The subscription will start from $15 per month. The family plan will run $20 per month with a storage capacity of 200GB. Users can upgrade to Premiere Apple One Bundle for $30 per month. The bundle plan will be available soon with a 30-days free trial to entice users with its exclusive offers.

Apple continued to focus on Apple Fitness with the introduction of its very new subscription-based services. This new service will be available for fitness buffs who use the company’s smartwatches. The product supports the health aspect of its users.

Users can choose from a range of workout videos that can be played on different Apple devices such as iPad, Apple TV, and iPhone. The data will automatically be saved to the Health app. The device has exclusive features that allow users to have an eye on their workouts with onscreen metrics which would be displayed on whichever screen will be using. Apple says that new workout videos will be released on a weekly basis. The service will be available for a cost of $9.99 per month.

Stay tuned with Source Soft Solutions for more updates on Apple and its products.

Do you want to develop an iOS or iPad app?